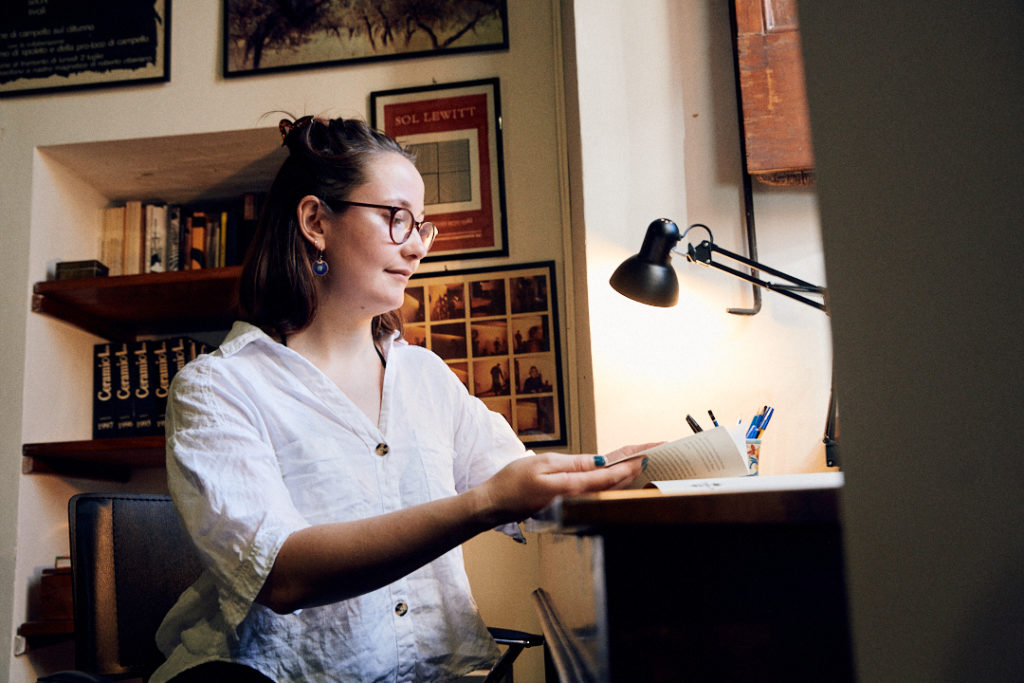 Marianne Brooker was awarded the 2022 Fitzcarraldo Editions/Mahler & LeWitt Studios Essay Prize for her proposal Intervals, an essay about choice, interdependence and end-of-life care. Blending memoir, polemic and feminist philosophy in order to transform grief into a resource for politics, Intervals explores the space between proximity and complicity, charting the author’s care for her mother as she refused food and water at the end of her life, determined to end her suffering from Primary Progressive Multiple Sclerosis. If an intervention describes the act of stepping in – to save a life or hasten a death – an interval describes the intimate and collective work of stepping back, creating space and marking time. Intervals turns our attention to a shared history of creativity, solidarity and fear, and a demand for a fairer, safer future.

For our Open Studios, Marianne presented a pamphlet titled ‘Inventive Forms of Love’, an extract from the forthcoming book developed during her residency in Spoleto. She also shared a film made by Jena Seiler, which documents her as she grieved for her mother.

Marianne Brooker is a writer based in Bristol, UK, where she works in community-led local media. She was formerly co-editor of The Ecologist, a climate justice news website. The first person in her family to go to university, she read for a BA and MPhil in English at the University of Cambridge. She holds a PhD in English Literature from Birkbeck, which she worked on while caring for her mother.

The other shortlisted authors, chosen from 124 entries, are Chloe Evans for Elastic Bands, Holly Isard for Molecular Visions, Benoit Loîseau for Fast, Oliver Shamlou for Shabaneh and Radio Silence by Stephanie Y. Tam.

The 2022 Fitzcarraldo Editions/Mahler & LeWitt Studios Essay Prize is an annual competition for unpublished writers. Initially made possible by an Arts Council Grant in 2015, the prize awards £3,000 to the best proposal for a book-length essay (minimum 25,000 words) by a writer resident in the UK & Ireland who has yet to secure a publishing deal. In addition to the £3,000 prize the winner has the opportunity to spend up to three months in residency at the Mahler & LeWitt Studios in Spoleto, Italy, to work on their book. The book will then be published by Fitzcarraldo Editions.

The 2022 Essay Prize was judged by an editorial committee composed of Joanna Biggs, Brian Dillon, Joanna Kavenna, Max Porter and Jacques Testard. The judges were looking for proposals for essays that explore and expand the possibilities of the essay form, with no restrictions on theme or subject matter. The prize aims to find the best emerging essay writers and to give them a chance to develop and showcase their talent. It also provides the winner with their first experience of publishing a book, from the planning, research and writing of it through to the editing, production and publicity stages.