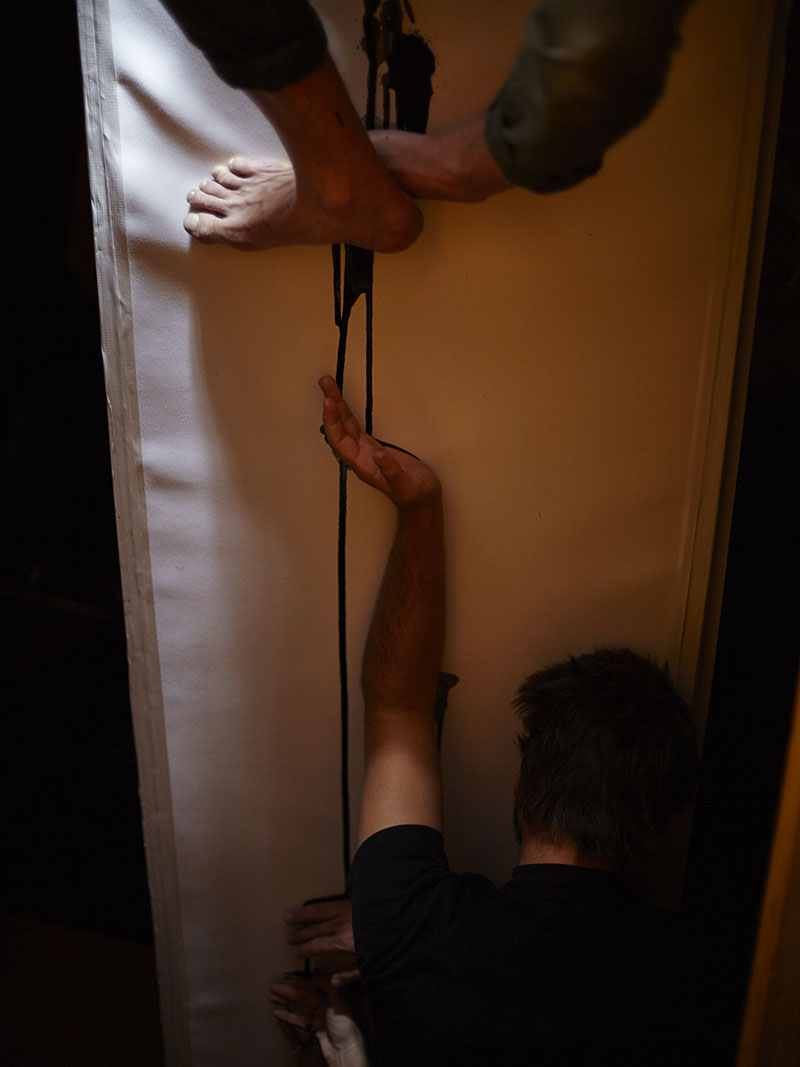 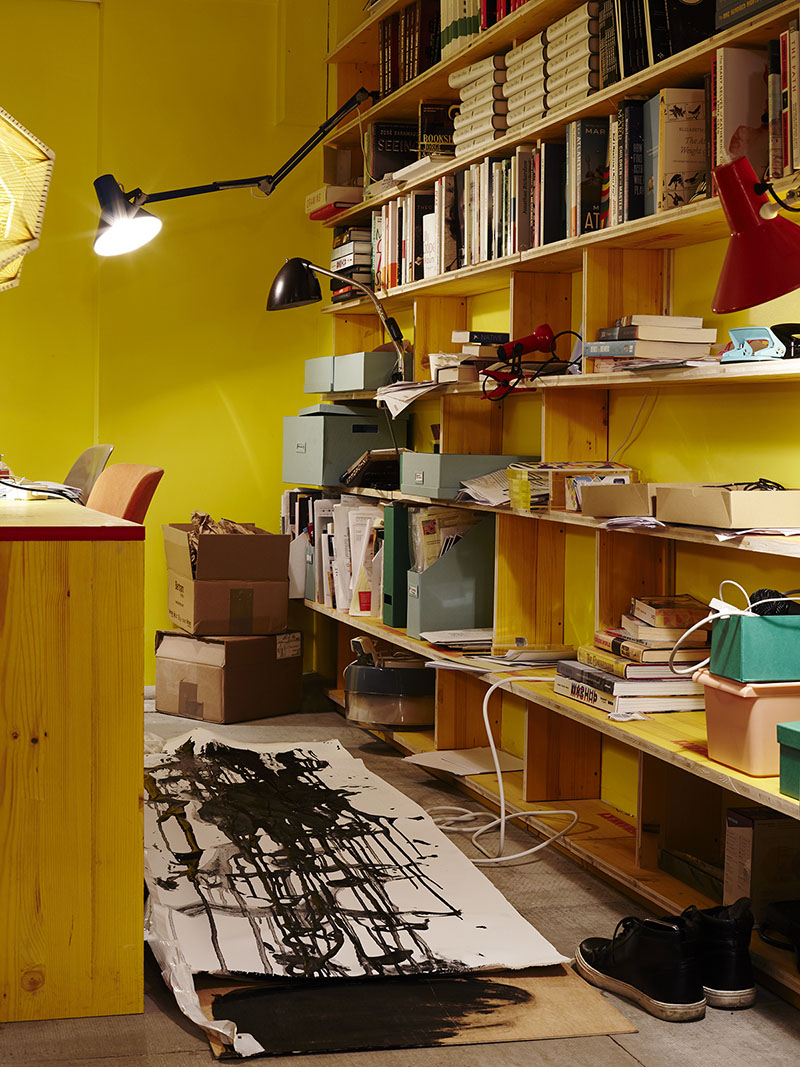 The Sol LeWitt wall drawings in the Torre Bonomo, made in the 1970s, include an important example of the artist’s inventive and playful pairing of written instructions with their equivalent geometric constructions, known as ‘location drawings’. This pairing of the written word with the visual image, thought of in relation to the work of the Oulipo group – from which the project title ‘The Rules of the Game’ takes its inspiration, is the starting point for a new text by Rye Dag Holmboe which he has been working on whilst in residence with the Mahler & LeWitt Studios this summer. Joschi Herczeg’s photographs, meanwhile, taken during his residency at the Studios this summer, will  illustrate Holmboe’s text and help bring the wall drawings to a wider audience.

Recent works by the collective JocJonJosch, of which Herczeg is a member, also engage with themes of the game or gaming. Most notable are their collaborative drawings from which in 2017, in a second phase of this year long project, they will develop a new body of work whilst resident in the Torre Bonomo.

Thursday 29 September. 19.00 – 20.00
Rye Dag Holmboe and Jo Melvin in conversation
Holmboe introduces the unique group of Sol LeWitt wall drawings at the Torre Bonomo and will discuss their place in the artist’s oeuvre with Jo Melvin. Melvin also spent time in Spoleto this summer with the Mahler & LeWitt Studios residency programme.

Friday 30 September. 12.00 – 18.00
Drop-in workshop: from artwork to printed matter
Mahler & LeWitt Studios curator Guy Robertson leads a drop-in workshop with Rye Dag Holmboe and guest designers exploring different ways of representing the LeWitt wall drawings from the Torre Bonomo in print. Over the course of the afternoon they will also discuss and demonstrate the dynamic relationship between artworks and their related printed matter using examples from recent art history.

Saturday 1 October, 12.00 – 15.00
JocJonJosch collaborative drawing performance
JocJonJosch, a collective of three, describe their collaborative drawings: “We have experimented with drawing and painting for some years, thinking of it as an activity to explore our collective identity. Traditionally painting is perhaps a singular process, the making of one artist, which may seem incompatible to a collective but as with much of our work, our interest is in the conflict between the individual and the group, a struggle which becomes evident in painting together. The gestures and strokes of one become lost within the whole.”

Saturday 1 and Sunday 2 October. 12.00 – 18.00
Exhibitions of workshop material and JocJonJosch drawings
Material developed throughout the course of the weekend, both during the drop-in workshop and the JocJonJosch drawing performance, will be exhibited at Libreria.

The Mahler & LeWitt Studios would like to thank Valentina Bonomo for the generous opportunity to work at the Torre Bonomo in Spoleto.

Rye Dag Holmboe is a writer; In 2015 he became a Teaching Fellow in the History of Art department at University College, London, working on Modernism and Contemporary Art. He has co-authored and co-edited the book JocJonJosch: Hand in Foot, published by the Sion Art Museum, Switzerland (2013). He is co-founder of Matchstick Books, an imprint which facilitates collaborations between writers and visual artists. The first book is Jolene, which brings together the work of poet Rachael Allen and photographer Guy Gormley. He curated a project for the Copeland Book Market titled IMAGE & TEXT at the Site Festival, Stroud, 2015. Holmboe’s writings have appeared in The White Review, Art Licks, Apollo Magazine and in academic journals.

JocJonJosch is the Swiss-English collective of Joschi Herczeg, Jonathan Brantschen and Joc Marchington. As a collective of three artists JocJonJosch are interested in issues of identity relating to the individual and the group both on a universal as well as a more self-reflective level. The individual and the community, success and failure, efficiency and waste, purposiveness and pointlessness, are features of the collective’s work that at different times become tangled and ambiguous. These oppositions represent a reference point in the process of making new work and what interests the artists is how that journey can evolve through a symbiotic relationship of conversation and creation. The collective has exhibited and performed across Europe since 2008. In London they have worked at the Institute of Contemporary Arts (ICA), The Photographers Gallery, and at the Saatchi Gallery.

Jo Melvin is a curator and writer, Reader in Archives and Special Collections at Chelsea College of Arts, UAL, London and during 2015-16 senior research fellow at the Henry Moore Institute Leeds. In September 2016 she visited Spoleto with the Mahler & LeWitt Studios to research for future events and exhibitions. Recent projects include ‘Animal, Vegetable Mineral’ Waddington Custot Gallery, 2016, Feb-May 2016,  ‘Christine Kozlov: Information No Theory’ at the Henry Moore Institute, Leeds Dec 2015 -Feb 2016, ‘Five Issues of Studio International’ Raven Row, London, 2015, ‘Palindromes: Barry Flanagan and John Latham’ at Flat Time House, London 2015, and ‘The Xerox Book’ Paula Cooper Gallery New York, 2015. Recent catalogue essays include “Seth Siegelaub: Beyond Conceptualism” at the Stedijk Museum, Amsterdam and “British Art and Conceptualism 1966-1979” Tate Britain. She is currently working on a monograph on Noel Forster, “The Seth Siegelaub Source Book”, published König late 2016 and working on the catalogue raisoneé of the sculptor Barry Flanagan to be published by Modern Art Press in 2018.

The Torre Bonomo, a medieval tower in Spoleto, was used by Marilena Bonomo, an important gallerist in Bari, for a series of exhibitions starting in 1976. Richard Nonas, Sol LeWitt, Giulio Paolini, Richard Tuttle, Jannis Kounellis, Nicola De Maria, Tullio De Gennaro and Osvaldo Licini all participated. It was Marilena Bonomo who introduced Sol LeWitt to Spoleto where, close to the Torre Bonomo, he subsequently lived and worked for many years. When he first started visiting Spoleto he used the Torre Bonomo as a studio. Looking forward to a new chapter of creativity, Valentina Bonomo has generously made the Torre Bonomo available for specific projects in collaboration with visiting artists, curators and writers and the Mahler & LeWitt Studios.

The Art Licks Weekend (30 September – 2 October 2016) celebrates the creative energy of the emerging London art scene. For the three-day festival young galleries, not-for-profit projects, artist-run spaces and independent curatorial projects open to the public with special events and exhibitions of work by early career artists. Now in its fourth year, the Art Licks Weekend provides an exciting opportunity for participating spaces and artists exhibiting to present their work to new audiences; increasing their reach more widely, whilst creating a greater presence in the immediate locality. The Art Licks Weekend is led by artistic talent and innovative ideas.

This project is supported by: