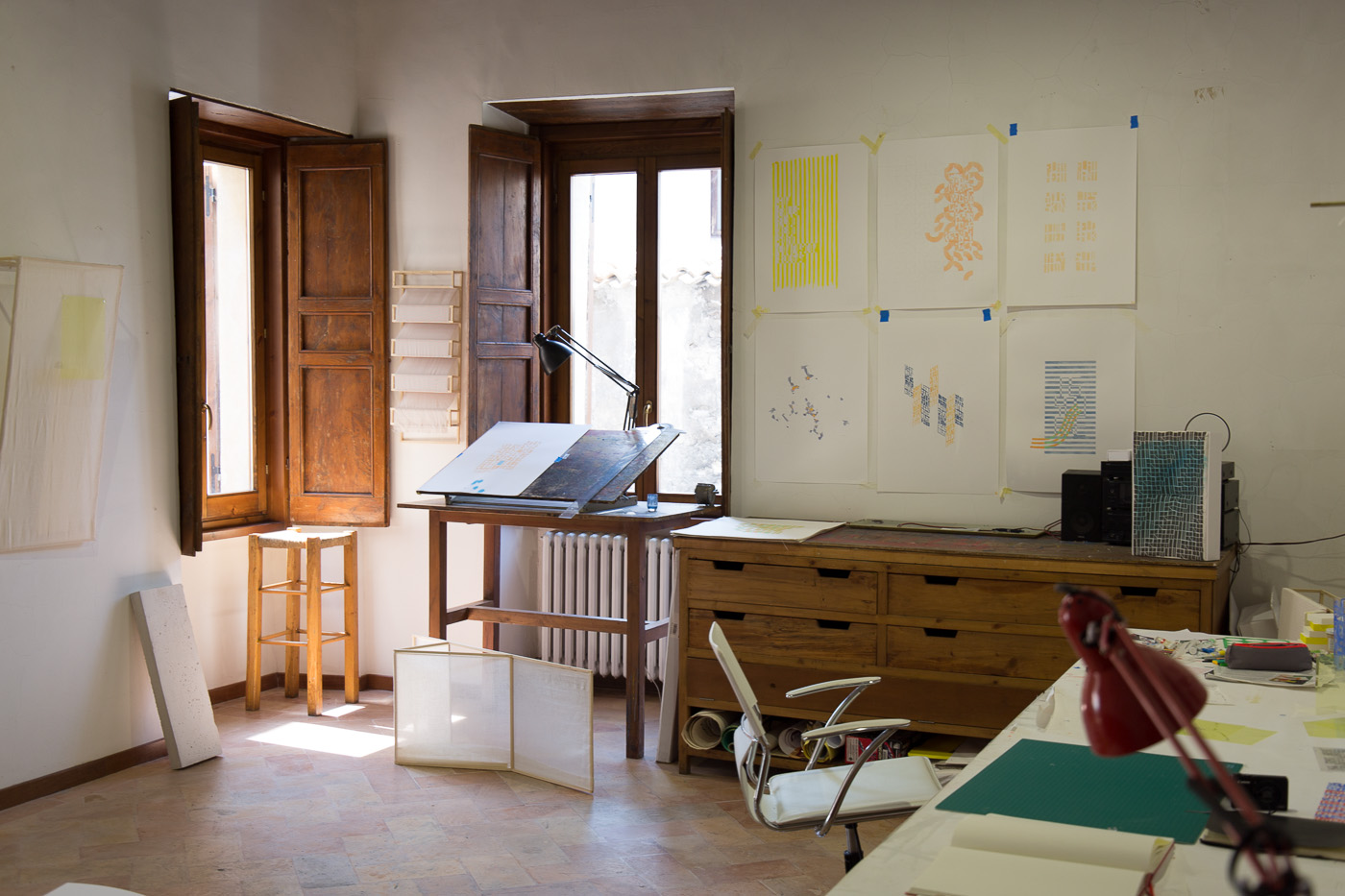 Above: Smith’s studio during his residency in Spoleto.

Smith graduated from The Glasgow School of Art in 2005. He works in sculpture and installation. In 2010 he moved to New York City where he is now based. He received a Master of Fine Art at Columbia University in 2012, and was the recipient of a Fulbright Scholarship for his studies into perpetual growth.

Describing his practice he says: “The data array is the motif of our age. Our generation’s technological advances have stemmed from two connected ambitions: to invent & deploy tools to generate ever more data from the world, and to organize and extrapolate value (meaning) from this data. My practice is focused on rendering physical the interface points between this speculative abstracted data and ourselves. My recent work has concentrated on the sensuality and psychedelic qualities of the data array: it’s ecstatic feeling of possibility, contrasted with its harder demands upon our participation and/or submission. I am currently working with repetitive texts, hand-cut anti-echoic tiling and cast concrete. A current key reference for my work at present is Knots, a book of short texts that rest somewhere between poems and looping programs, published in 1970 by the influential psychiatrist R.D. Laing.”

Smith has exhibited widely in the US and Europe, with solo exhibitions at Malrauxís Place (US), Space In Between (UK), Young World (US), Infernoesque (GR), and SWG3 (SC). He is currently represented by Space In Between.

Smith used his residency to develop, in particular, his drawing. It was unusual for him to be able to focus on drawing with such consistent attention since his studio in NYC is predominantly equipped for sculpture. The following conversation between Smith and curator Guy Robertson charts the development of Smith’s thoughts throughout the residency in relationship to Spoleto:

Guy Robertson: You are a sculptor but during your residency youíve predominantly been working in 2D; has this change of focus been useful?

Sandy Smith: It’s been really useful because there’s often a tendency in New York, where time is  more pressured, to leap into production. Not having my usual sculpture studio was a good push to focus on the text in my work as well as on colour.

GR: Can you tell me more about your work with text and how this relates to the 3D work?

SS: There are two main aspects of my practice: text and sculptural form - they combine but they serve almost opposite functions. With the text, which I have been experimenting with in my sketchbooks and drawings, I often make dense and hyperactive repetitive patterns or, in the case of my video work, use rapid flashing text. Using simple elements I try to overload the viewer so the text takes on a kind of effervescence.

The sculptural forms, particularly the concrete works, are dead, flat and dense by comparison - dense in a useful way: like a construction crane counter-weight. I’ve been photographing these around Spoleto, there’s something I really like about their weight and useful deadness, symbolically elevated, yet cheap.

Both the sculpture and text have a push and pull effect: The text pulls you in, because there’s obvious communication and you want to read it and understand it. However, it is too intense, so it has a push back effect. The sculptural elements have an opposite push-pull effect; a concrete slab has an immediate push, as a very hard, stand-off material, but because it’s paired with these over the top patterns and texts, in becomes a place for the eye to relax, like a pond or a pool.

GR: It’s interesting that you describe your work with language as hyperactive - the works in the studio here don’t feel like that, to me, there’s something softer, more lyrical; I wonder if this is an influence of being in Spoleto, has your palette softened for example?

SS: Yes. Certainly with the palette - it’s sun bleached now, informed by the colours in the town and on the buildings which I’m moving through all the time. These peaches and creams, magnolias, light greens, bleached out blues. There’s also a dazed, heatstroke confusion that has crept into the language I’m using, for example the phrase; “Flat heat flat want your skin lies back time tied held back they toil slow loop”, which I think evokes the feeling of sitting in one of the piazzas, people-watching and melting in the heat. In Spoleto this summer the heat is overbearing - it’s a real hot light energy - which is muted by its own intensity over time. It kind of bleaches itself out and blurs boundaries. My palette has been responding to that and so have the texts, for example: “Tongues rolling over and over and borders crossed over and over and meaning shunned over and over and”. There’s a deliberate melting together of things - ”tongues rolling” - a confusion of language which is also sensual or sexual.

GR: As the title of your open studio event this sunday you’ve chosen LOVERALLOVERAL…

SS: Yes. It’s a 14 letter loop -
depending on where you start in the loop it’s either ‘all over all over’, ‘over all over all’ or, as the title is cut, ‘Lover all love al’. It’s a little cheesy with ‘love’ forefronted, but it also has this much darker ‘all over’ ring to it, like you’re underneath and everything else is over you, or ‘over all’ a kind of spinning around of something being over the top, finished, beyond.

GR: You’ve spoken to me about the architecture in Spoleto in terms of a veiling and unveiling effect: a strange visual play as you go from the dark, dense alleys  into light open spaces, the piazzas. There’s a similar rhythm at play in the language and visuality of your work - as the texts reveal and obscure their meaning, for example.

SS: I enjoy trying to define or examine something by altering focus; zooming in to explode it, or zooming out to see it in context. The repetition of this process is confusing, you lose your place and balance, but I think the glimpses of understanding caught by altering perspective are similar to the vistas you catch when moving through the town.

GR: One phrase that emerged early on, appearing in one of the first drawings you made in the studios, was “techniques of organisation”. How does that relate to the work you’ve been developing?

SS: Another way of putting it could be, “methods of understanding”. The primary human achievements of our generation and to some extent a half generation prior, have been in information technology; in generating data from the world and developing tools to organise and generate meaning from data sets. When you’re organising your files, your data, your photographs, your emails, you think you’re organising it so that you can retrieve it at future dates and it will be useful. But also a part of it is just getting things out of your way. In essence it’s a type of destroying: the form and mould create an absolute loop, a complete form or zero point. There’s a parallel here with the sculptures I’ve been making which resemble repetitive shelving units and could fit flush into one another. They cancel each other out, the object that’s contained fitting perfectly into its container and disappearing from the world. Similarly my text pieces often use exactly fifty percent colour and fifty percent blank space.

GR: Are you trying to show a restriction in the effectivity of these systems?

SS: No. It is actually a repeated opening up of possibility, but then the possibility is itself contained. I always have this desire for possibility or potential, which is an anxiety thing as much as anything. There’s a German word for it I was writing it down before. “Vorfreude - enjoying the anticipation of the event more than the actual event”. There’s something in making art that’s always about that.

GR: There’s a series of photographs on the walls around your studio showing modern architectural interactions within the old town of Spoleto. Could you comment on these, in particular the escalator system that carries people from the new town to La Rocca?

SS: One of the most inspiring things I’ve seen in Spoleto is this system of tunnels and escalators that goes under the city. I thought I had got my head around the layering of history in the town - each epoch built on top of the last; Roman, medieval, Renaissance, modern and everything in between. At several points there are these cutouts, protected by glass that you can walk over, or railings, that very clearly show this stratification - you look down onto ruins. Then, beneath it all, I found this bizarre 2000’s shopping mall type situation. You go through one of these cutout areas, with ruins, and then down in a shiny new elevator with soft music playing. Now you’re way below the Roman epoch and you’re slowly pushed along underneath the city. What I thought was my semi-nuanced understanding of the layers of history and of time just snapped. Being slowly pushed on these ramp escalators, people movers, slowly being shunted along the town, there was a methodical feeling that seemed similar to the one-word per line poems, with their slow pace and a blankness to the words, that I’d been writing.

GR: You mentioned that a strong influence on your work has been that of Sol LeWitt. Could you say what itís been like working from his studio?

SS: Daunting, but also inspiring. I’m interested in working within the sculptural idea of data arrays, picking out specificities or objects from a data array – and LeWitt’s work goes through that too. We were talking earlier about the notion of leaving something as potential - pure idea, pure possibility - as opposed to the specificity of enacting something in the world. When you make something specific you run the danger of foreclosure, but Sol’s thing was to do everything – you would have the idea and you would do every single variation, every single possibility of that algorithm. So you have both the purity of the possibility of the idea as well as the incidental joys which doing something real in the world brings. Our generation is much more familiar with the data array and how it works. The algorithms we encounter and use in our daily life are so much more complicated that there’s almost no way of doing everything, exploding all the possibilities.

The work Smith developed on his residency found direct expression in a solo exhibition at Space in Between, London, in September 2016 called LOVERALLOVERALLOVERAL (pictured right), see the gallery’s website. 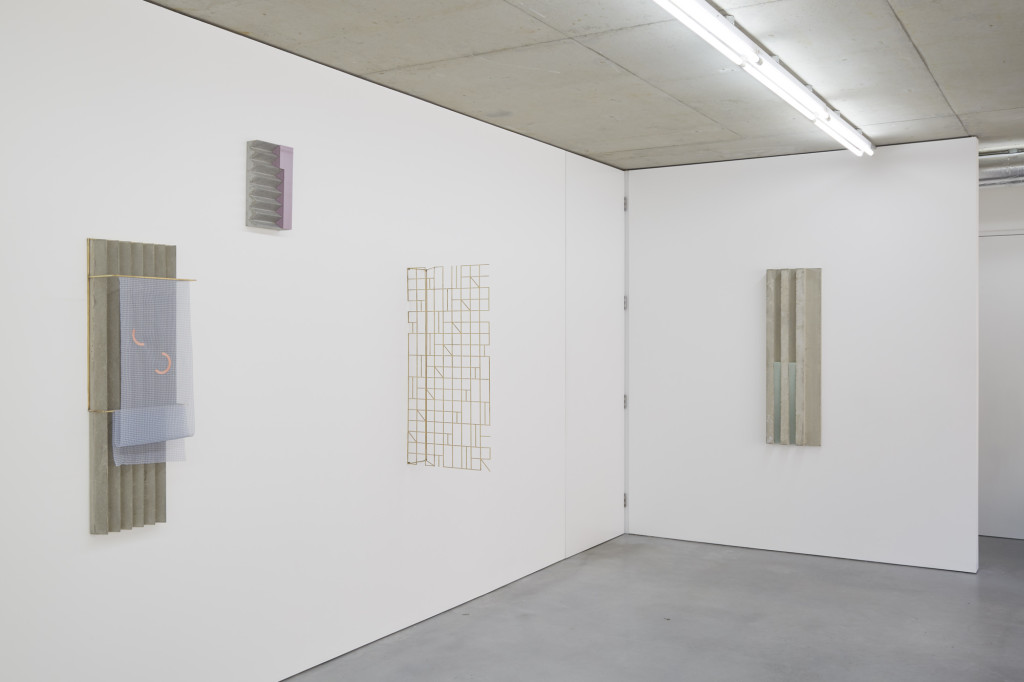