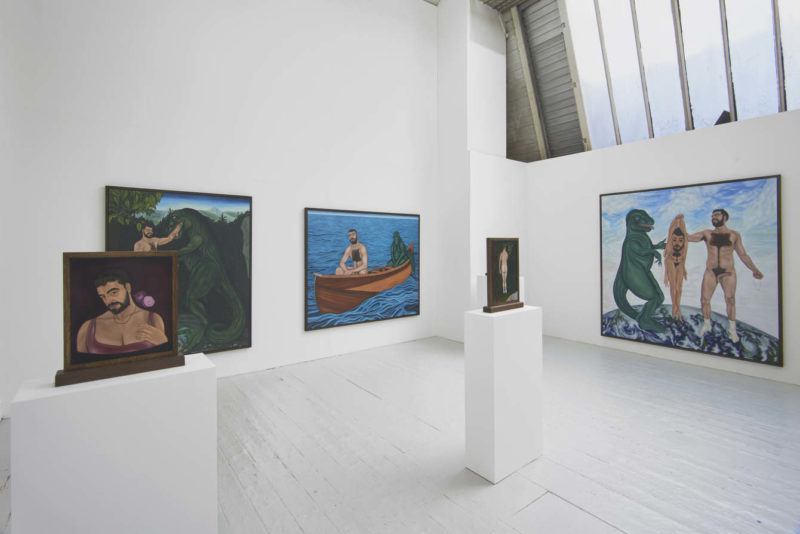 Glen Pudvine’s surreal self-portraits incorporate a variety of art historical references and assess sexuality and white masculinity in the contemporary moment. During his residency he plans to spend time discovering the histories of painting in the area. Describing his reference points he has said, “I go to The National Gallery in London a lot. I like Cranach, Hans Holbein (The Ambassadors, of course). … I look a lot at Bosch. The experience of going to see works from Giotto or Caravaggio in churches is as much of a reference point too. The atmosphere of those places of worship is incredible and enhances the gravitas of the message.”

Pudvine (b.1989, Chester, UK) lives and works in London where he graduated from the Royal Academy Schools in July 2019 after finishing his BA in Fine Art at Leeds Metropolitan University in 2011. His work was featured in several group exhibitions, including Premiums: Interim Projects 2018, Royal Academy of Arts, London (2018); New Contemporaries 2017, Block 336, London and Baltic Centre for Contemporary Art, Newcastle (2017-18); Addams Outtakes, Roaming Projects, London (2017); Something Like You, ANDOR, London (2017); Tired and Clever, Westminster Waste, London (2015); Every Emotion Under the Sun, Plaza Plaza, London (2015); and Tossed Salad and Scrambled Eggs (with Jesse Wine), Cactus Gallery, Liverpool (2015).