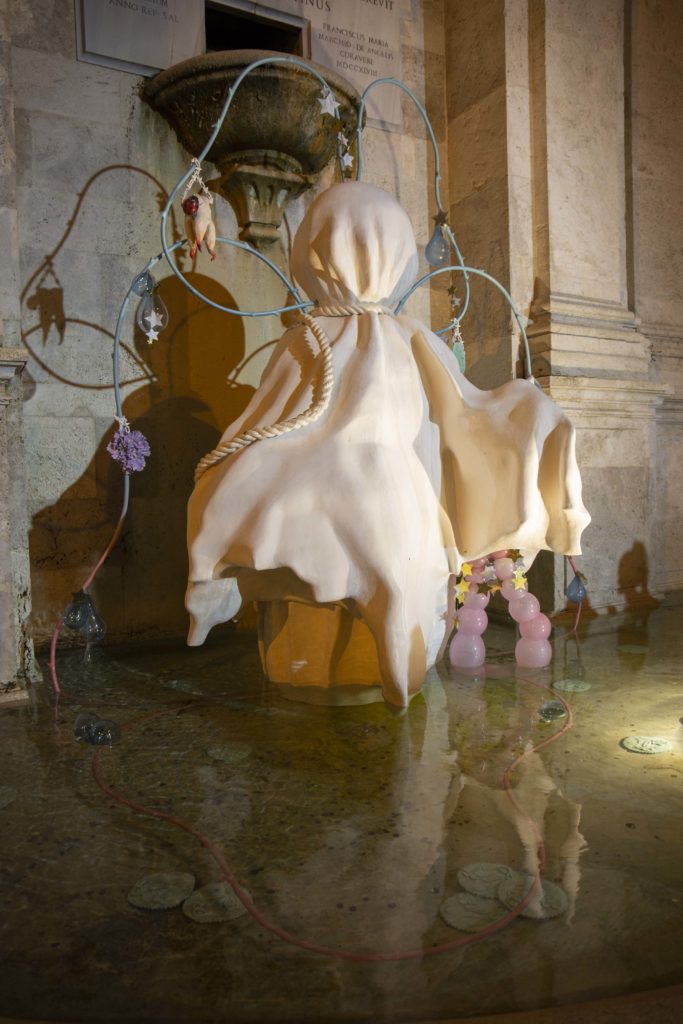 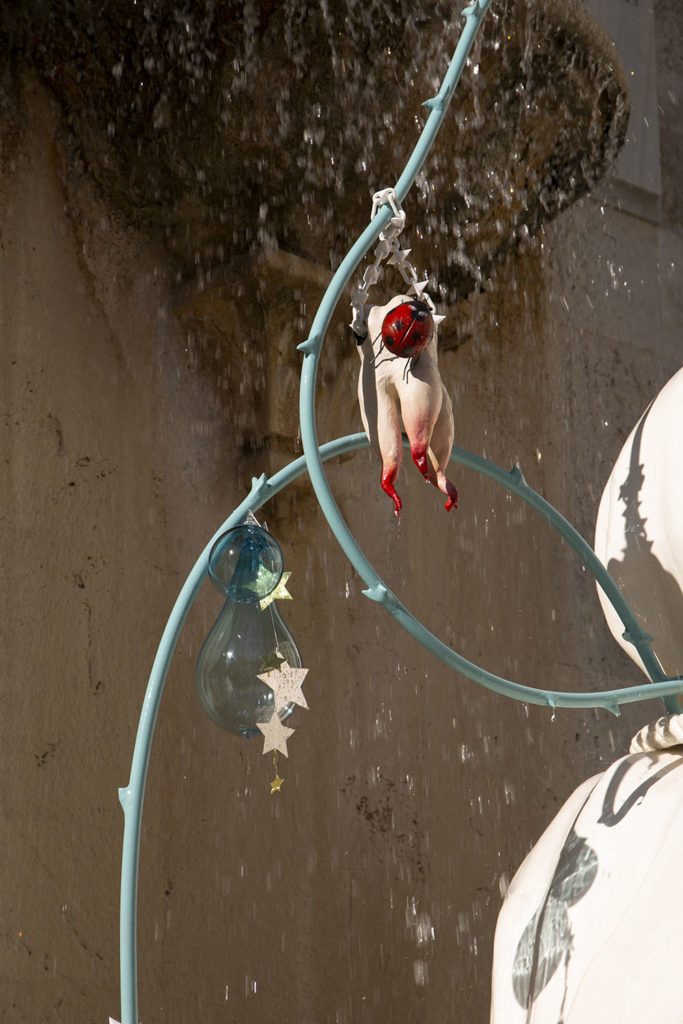 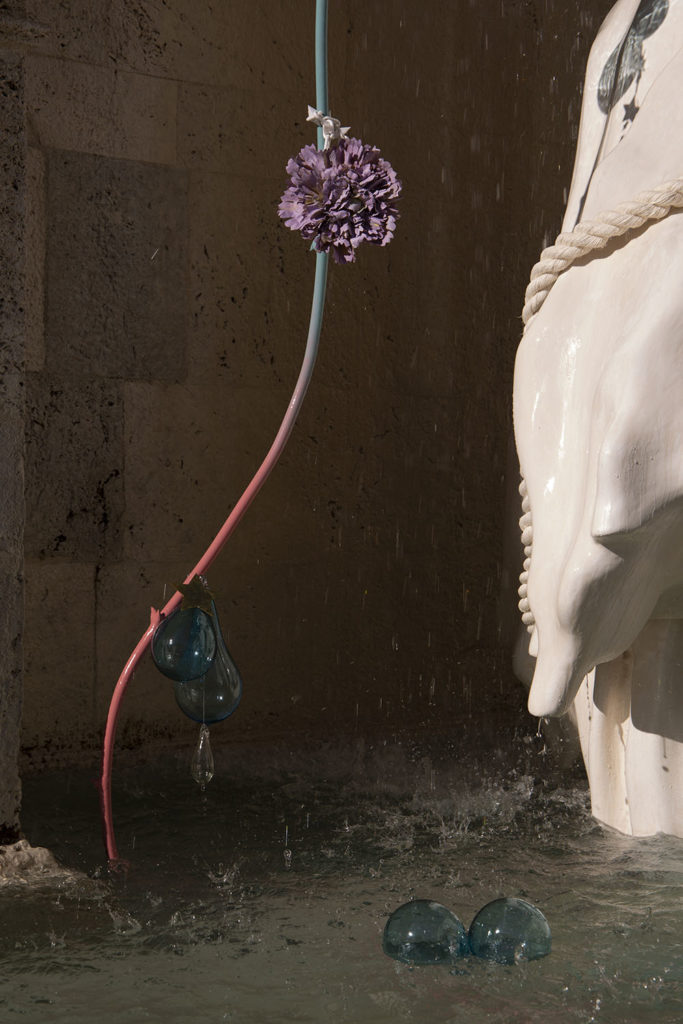 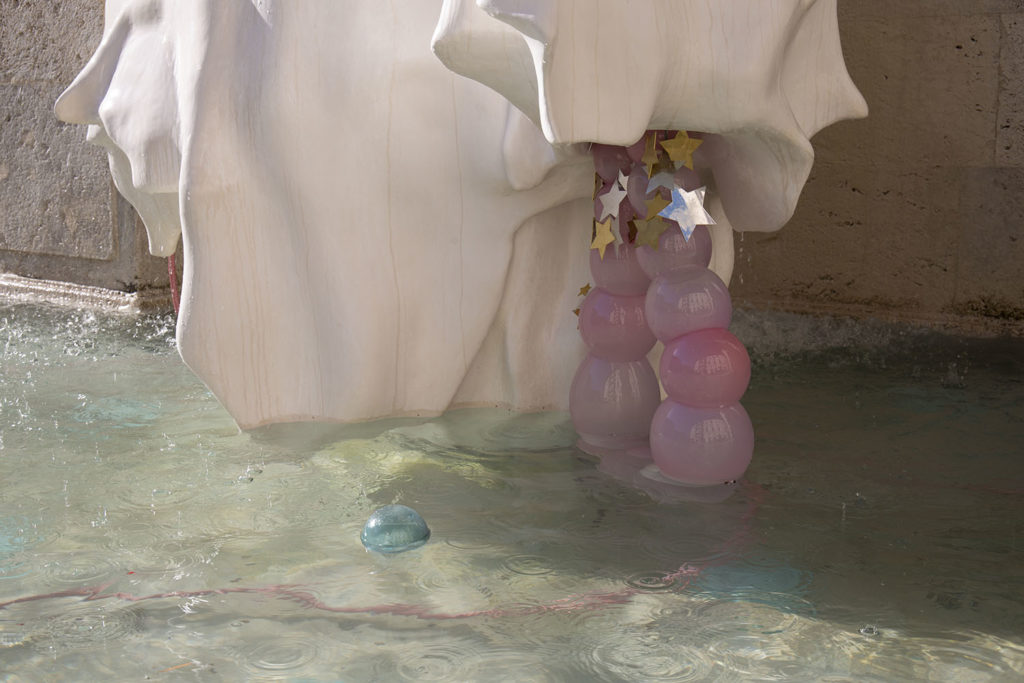 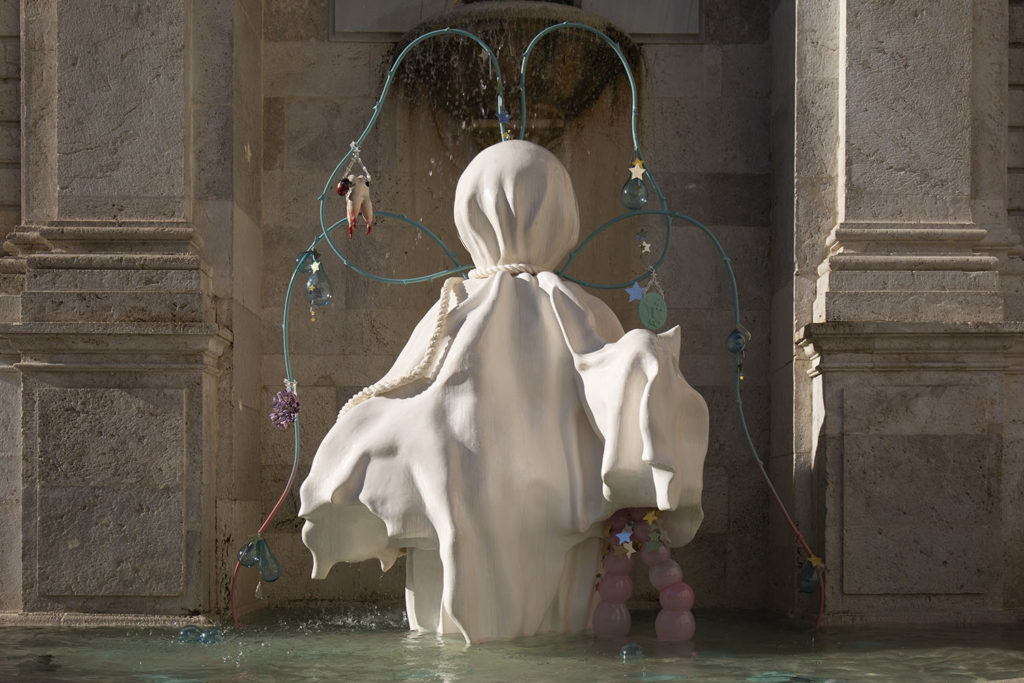 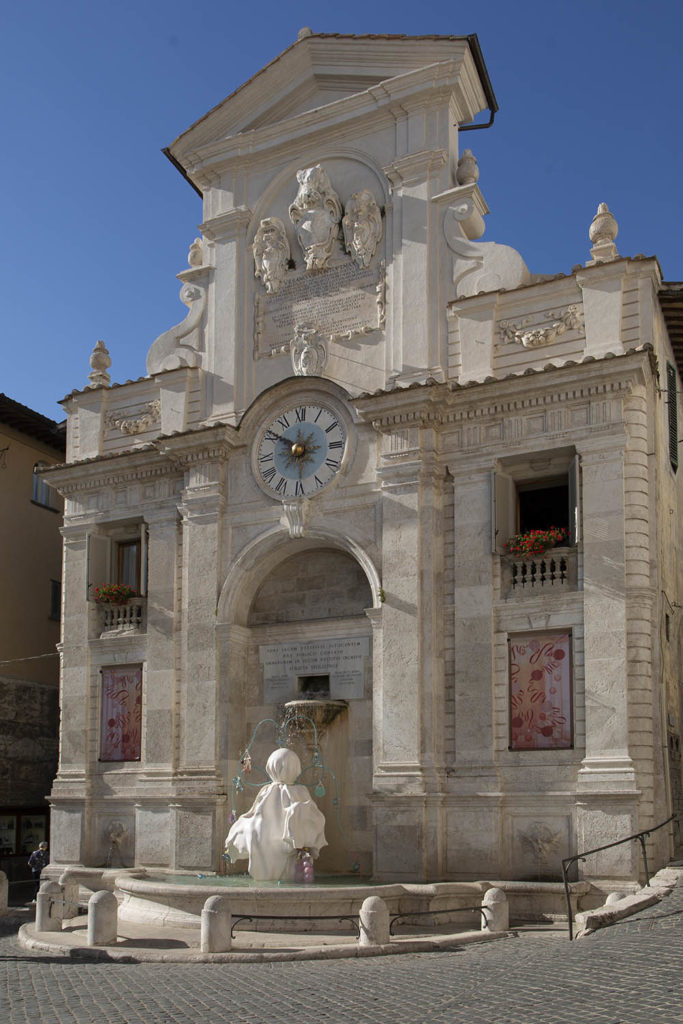 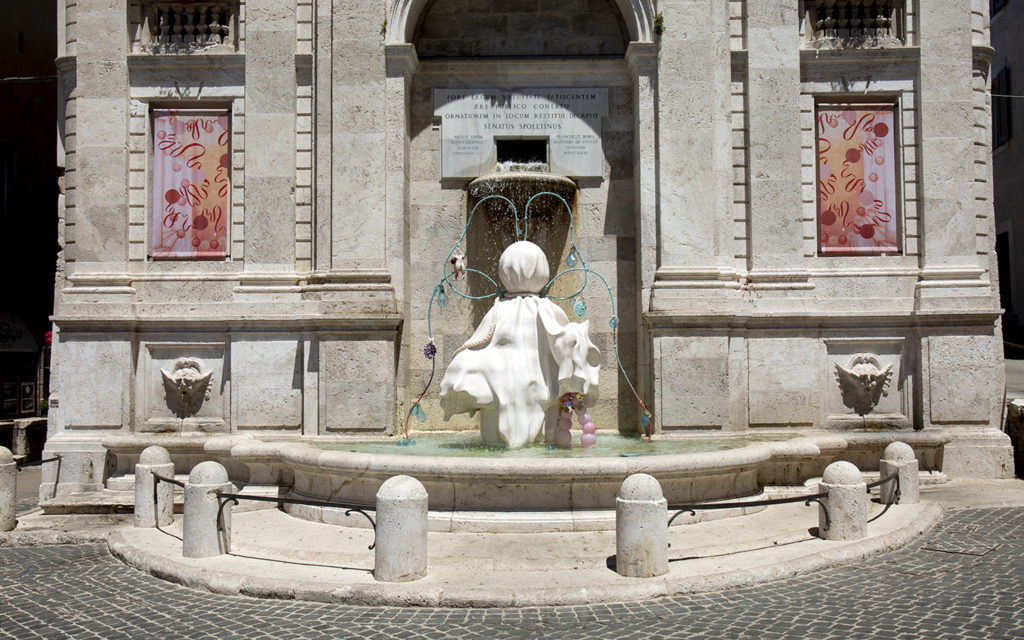 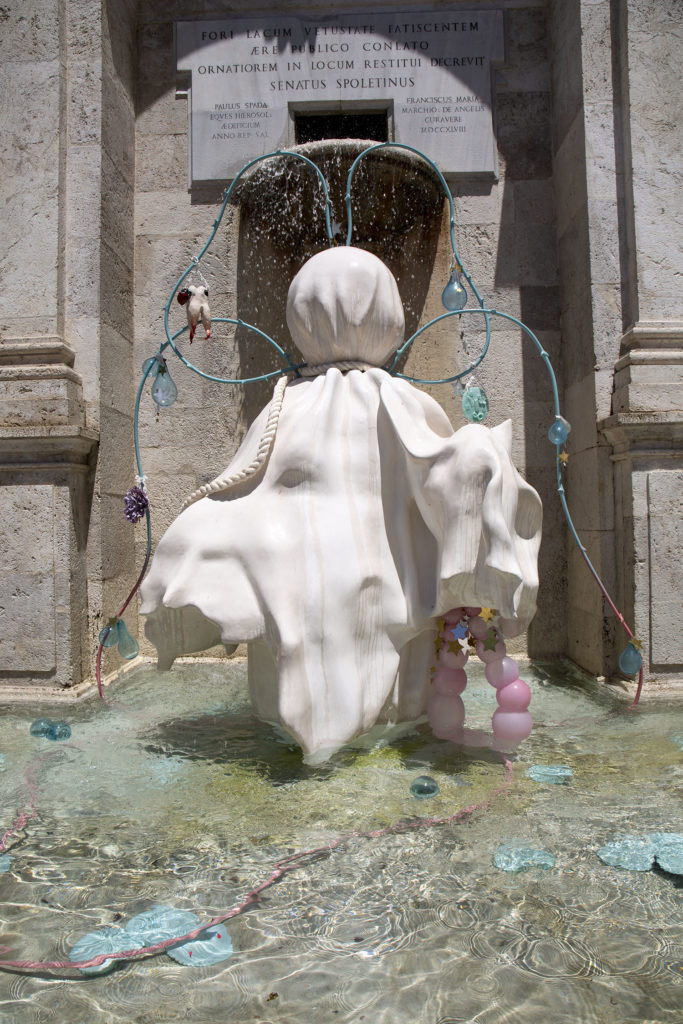 …the sun is the ghost that haunts the night…

For the 64th edition of the Festival dei Due Mondi, Turner prize winning British artist Tai Shani presented a site-specific sculpture installation inspired by her research into psychedelics, feminism and myth.

The Neon Hieroglyph installation was sited on the Fontana di Piazza Mercato in the centre of the old town, at one end of what was once the Roman Forum. The fountain has been used by other contemporary artists, including Christo and Jean-Claude who wrapped it in fabric and rope for the 1968 edition of the Festival dei Due Mondi. Spoleto born artist, Leoncillo Leonardo, proposed an installation for the fountain’s two empty niches, although it was not realised.

Shani’s installation – a portrayal of an enigmatic ghost, coiled in lucky charms and tears – is a part of her ongoing The Neon Hieroglyph project, a series of poetic considerations on the history of ergot, a fungus from which LSD is derived. In the artist’s words, The Neon Hieroglyph poses “the building of a house we will never live in, a house for our ghosts, where the gothic and the hallucinatory collide, where gothic affects and fractal dread form a mausoleum for psychedelic spectres. Also the sun! The sun is a ghost that haunts the night!”

Before industrial milling, ergot sporadically took hold of grain crops across Europe, instigating mass hallucinations. The Italian island of Alicudi experienced multiple infections and, as a psychedelic catalyst, it provoked stories of ghosts and witches.

In The Neon Hieroglyph, the story of ergot and the ghosts it inspires make apparitions out of apocalyptic anxieties and utopian aspirations – grief and discord circulate on the same interconnected web as ecstasy and empathy. The inner life of the feminised body lurches between technological interconnected bliss and fractal disintegration – new realities are glimpsed and briefly held.

The Neon Hieroglyph for the Festival dei Due Mondi was co-produced by the Fondazione Carla Fendi and the Mahler & LeWitt Studios. Currently The Neon Hieroglyph exists as an online artwork, premiered on the Virtual Factory (Manchester International Festival) – a CGI storyworld unfolding around experimental poetry in nine episodes – and a film and sound art collaboration with the Serpentine Galleries ‘Back to the Earth’ program. The Neon Hieroglyph will also be presented as a major installation for the British Art Show (Hayward Gallery, UK, touring).

Episode 7 of the Virtual Factory The Neon Hieroglyph will be screened throughout the festival at the Palazzo Collicola – Galleria d’Arte Moderna G. Carandente in Spoleto.

Artist Biography Tai Shani creates large-scale immersive installations which are developed across multiple platforms over an extended period. Her current focus is Neon Hieroglyph (2020-ongoing). Shani’s work combines experimental texts, performance, film, photography and sculpture. She takes inspiration from disparate histories mined from forgotten sources and transforms them into rich and complex monologues that explore feminine subjectivity. Her project DC Productions (2014-2019), for which she was awarded the Turner Prize, proposed an allegorical city of women; it was an experimental and expanded adaptation of Christine de Pizan’s 1405 pioneering feminist book, ‘The Book of the City of Ladies’, within which Christine builds a city for notable women. Shani lives and works in London. She has exhibited widely in the UK and internationally including at Tate Britain, London; Turner Contemporary, Margate; Hayward Gallery, London; Nottingham Contemporary, Nottingham; Glasgow International, Glasgow; De La Warr Pavilion, Bexhill-on-Sea; Arnolfini, Bristol; Fondazione Sandretto Re Rebaudengo, Turin; and The Tetley, Leeds. She was a joint winner of the Turner Prize 2019 and was shortlisted for the 8th edition of the Max Mara Art Prize for Woman. She is the co-founder and co-curator of artist-led digital film channel Transmissions.