James Capper: ATLAS in Spoleto
A film by Matthew Burdis 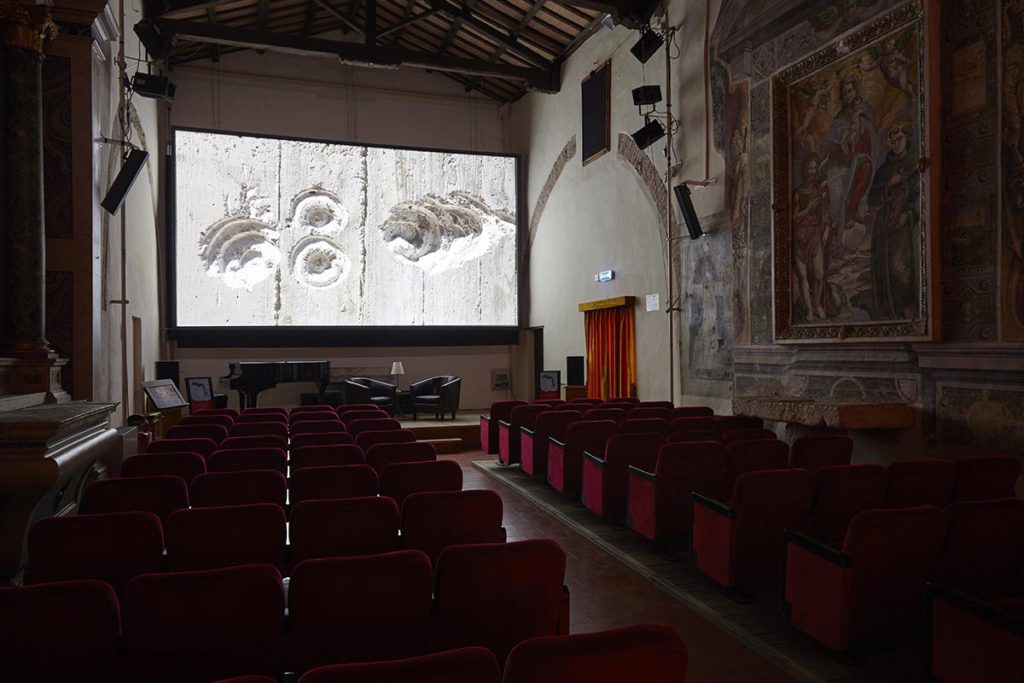 Clicca qui per informazioni in Italiano>

An Anna Mahler Association project for the Mahler & LeWitt Studios and the 2017 Festival dei Due Mondi.

In a cinema in the old town of Spoleto we presented an installation of Matthew Burdis’s film that  documents James Capper’s project with the mobile sculpture ATLAS for the festival in 2016. ATLAS (commissioned by CGP London with support from The Henry Moore Foundation, Arts Council England and The London Borough of Southwark) operates from a concrete plinth, carving it away using specially designed mills.

During the Festival dei Due Mondi 2016, the sculpture was moved between three concrete plinths placed at Basilica di San Pietro, Piazza della Signoria and the Rocca Albonorziana. At each site it spent several days carving its plinth. The sculptured blocks remained in their locations for the duration of the Festival – either waiting for ATLAS to arrive, or showing the sculpted remains of the block on which ATLAS has already worked. Burdis’s film documented the process.

Matthew Burdis (b.1993, Newcastle, England) is a film-maker who lives and works in London. He was awarded the Landmark PLC Award for his degree show film Lindisfarne One One and runs the Chelsea Film Forum at the Chelsea College of Art & Design in London. He has recently written and directed a short film in partnership with the Institute of Contemporary Arts (ICA), London as part of the STOP PLAY RECORD program. He was artist in residence at the Mahler & LeWitt Studios in 2016 and is currently working on a new film project called the Houses of Mahler, about the houses and composing huts of Gustav Mahler.

For more information about the project please click here.