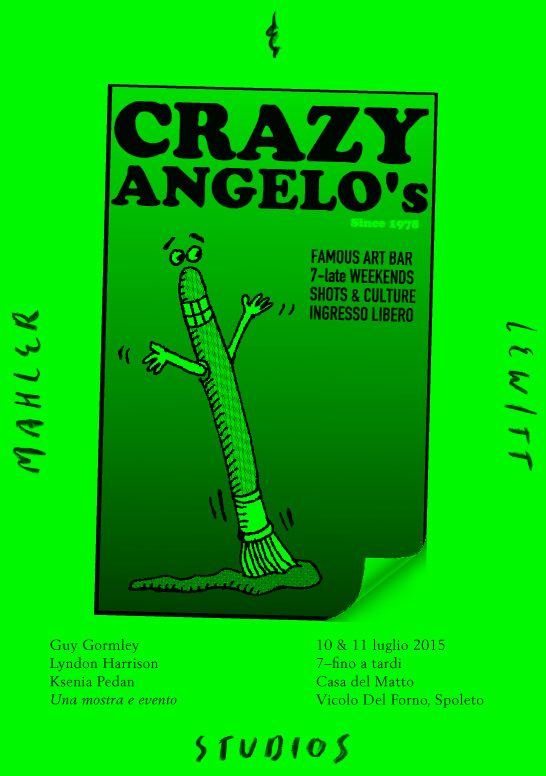 To coincide with the final weekend of the Festival dei Due Mondi we asked Guy Gormley to develop the events he had staged in Spoleto during his residency with the Anna Mahler Association in 2013. These events had repurposed disused spaces in the old town and incorporated music, installations and a late night bar. Gormley invited Lyndon Harrison and Ksenia Pedan to collaborate on a temporary venue and ‘art bar’ called Crazy Angelo’s.

The venue made use of an old brewery near the centre of the old town. The bar was decorated with hanging lights, photographs, and a water feature. An adjoining gallery space showed a series of paintings and painted plaster sculptures with a playful modernist look which incorporated toilet rolls, candles and wine bottles. They invited musicians and artists from London and Spoleto to send mix tapes to be played in the venue over its two night run.

The following interview is transcribed from a conversation between the Mahler and LeWitt Studios curator Guy Robertson and the artists:

Guy Robertson We began describing Crazy Angelo’s as an exploration in social space. What kinds of social space were you referring to with the installation and how far were you trying to enact or react to them?

Lyndon Harrison The bar room references Western dive bars – an approximation of a counter cultural space which doesn’t really exist in Spoleto and that exists less and less elsewhere. I find them some of the most exciting places to be, when you’re in a good one. When I enter a space like that I get excited – its an approach to social space and having a business that is not alienating or tough.

[slideshow id=”1″]
Guy Gormley In London we’re losing so many small places which is something I’ve been thinking about and trying to record. These places which are run by one or two people in their own peculiar way and can become very valuable to groups of people in facilitating an opening up and a sense of community. Making a bar like this with Crazy Angelo’s is trying to play around with the kind of unknown entity that these places possess that makes us feel a certain way. As an artist I’m interested in trying to create a temporary environment with this attitude in mind, asking whether this kind of experience can be translated, can you engender some of the feelings that we have in these places?

Guy Robertson There is an absence of pretension which is refreshing. How would you describe your aesthetic? As one of failure, DIY, amateurism?

Ksenia Pedan I find it hard to narrow things down in that way. An interesting point for me is when you stop caring about what you look like from the outside, you just try to entertain yourself. The backroom gallery had a certain cheesiness. The art works in the gallery had this kind of fragility and desperation to them – perhaps because they have an aspirational sense which at a certain point turns into humour. Humour is about communication, it’s about ‘getting it’. An awareness of this shifts your priorities when you are making a piece of work. Its not so much about making something for yourself but about ‘getting it’ together. I think that you can close things down when you try and create a kind of perfection or tastefulness.

Guy Gormley Being close to failure is more fertile. To try and be ok with being on that edge where it’s not quite clear where it sits. Its more generous.

Guy Robertson What about your references to modernism?

Lyndon Harrison I think modernist artists were always involved in kitching the past, often the styles they themselves had been working through in less humoristic ways, like Cezanne and his ‘Bathers’, they become more and more playful, and maybe cheesy or sentimental, as time goes on. The reason that those paintings are so strong and still beautiful is because of how serious Cezanne is about play. It’s like making jokes about your own sadness, they’re the funniest jokes. You need that kind of love and understanding if you want to make jokes otherwise it’s just irony or something worse.

Guy Robertson As an exploration in social space the installation and event inevitably took on the language of performance. How do you relate to that?

Guy Gormley Its not a performance and we are not performance artists. But we did find ourselves doing certain things to answer the needs of the space.

Ksenia Pedan We were more concerned with making objects and the general atmosphere of the place.

Lyndon Harrison Its about walking in somewhere and thinking that you are not just there to lose your money. You can feel a humanity there. There’s potential for a two way experience – as the audience you don’t feel divorced from the makers.

Guy Gormley The interest in things being messy and unfixed comes from a desire to be closer to something human. It is the same with the interest in dancing and sweat or the body in the context of these spaces.

Guy Gormley Sometimes you go to a gallery and you feel locked out. A bacteria on a clean surface!

Ksenia Pedan If you’re focused on being hygienic you have to go through lots of precautionary steps to achieve it and keep it. But maybe we as humans aren’t so insular and hygienic – it’s an idealised version that gets in the way of a more zunkish experience.

Born London, England 1985, Guy Gormley studied at Central St. Martins, Brighton University and completed a BA in Fine Art at Goldsmiths College of Art in 2009. He works primarily with installation, photography and music. He DJs under the name Enchante and co-founded the club night and record label Top Nice. He also co-organises the curatorial platform Brickhouse. He has produced three artists books and a collaborative publication with the poet Rachel Allen and Matchstick Books. He exhibits regularly in the UK and abroad.